In the context of founding LAVES, "Feed Monitoring” was established as a specialised department. This was an important step towards intensifying and focusing on feed control in Lower Saxony. LAVES has also been responsible for feed monitoring in the state of Bremen since July 2005. With an annual production of approximately 8.3 million tonnes of fodder for livestock, Lower Saxony/Bremen is the most significant fodder production location in Germany (about 40% of the entire production in Germany is in Lower Saxony and Bremen (financial year 06/07), source: BMELV 2007). Apart from the production of feed for livestock, an extensive feed industry for domestic animals which has to be monitored can be found in Lower Saxony/Bremen.

The monitoring covers all areas of feed manufacture and trade, including agricultural enterprises. Currently, a total of twelve feed inspectors carry out company inspections, audits and samples on site. To ensure a statewide presence, these inspectors are allocated to offices in Oldenburg, Hannover and Lüneburg. The coordination and processing, as well as administration, are managed by the central office in Oldenburg. In the event of a complaint, from here a violation procedure will be initiated if applicable, or, in individual cases, the suspension of production.

The official analysis of samples takes place primarily in the LAVES Feed Institute, Stade. Through the co-operation of the other LAVES institutes as well as other accredited institutes, it is possible to cover a wide analysis spectrum.

Based on the "National Control Programme for Feed Safety”, which is being established with the involvement of the States, BMELV and BVL, feedstuffs are examined, among other things, for the following parameters:

The declared objective is to safeguard qualitative highvalue and healthy, harmless feed stuffsused in the manufacture of impeccable food products of animal origin, as well as to protect animals and the environment from avoidable pressure.

Further information can be found in the LAVES annual report. 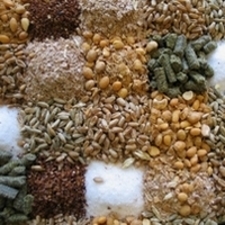