Animals are among the primary sources of food for humans. For this reason optimising animal health is of utmost importance, and includes not only the assessment of individual animals but furthermore, health inspection of livestock farming and hygiene in agricultural enterprises, regional and nationwide livestock transport, and lastly in the slaughtering of animals and procuring of meat. The most intensive surveillance possible, from birth right up to meat as a foodstuff, constitutes a significant task of consumer protection while taking into consideration the conservation of animals as living creatures.

As part of the monitoring of livestock health, the recognition and eradication of animal diseases play a special role. The occurrence in recent years of animal diseases such as swine fever, foot and mouth disease, as well as BSE has shown how important preventive measures are, in addition to diagnosis and eradication of disease, in order to minimise economic losses in agriculture, as well as ensuring consumer protection.

On 17 May 2002, after three failed attempts, Animal Welfare was included in the Constitution of The Federal Republic of Germany. The task of monitoring Animal Welfare within the framework of diagnostics was allotted to the Veterinary Institute of LAVES by ministerial decree. A large part of the inspection process deals with the clarification of issues pertaining to cruelty to animals and the related suffering and pain endured, as well as evidence of neglect in husbandry, feed and care, resulting in disease or death.

On 26 April 1986, after the Tschernobyl nuclear catastrophe, a radiation protection act came into force stating that radioactivity in the environment also had to be monitored, in order to safeguard the population. Among the tasks of all States is the inspection of foodstuffs. Since 1988 the Food and Veterinary Institute in Hannover has been carrying out inspections to determine radioactivity on various foodstuffs from the district of Hannover, with special emphasis state-wide on milk and wild animals. The special programmeon wild animals is the most comprehensive ongoing wildlife monitoring programme nationwide.

Within the scope of the National Residue Control Plan, the Food and Veterinary Institutes in Hannover and Oldenburg test for residues of pharmacologically active substances and environmental contaminants in live animals and in animal products in Lower Saxony, in accordance with the Directive 96/23/EG of 29 April 1996. The results of these tests are reported to the BVL (Federal Office of Consumer Protection and Food Safety) and there, together with the results from the other federal states, evaluated and published. 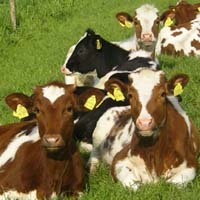